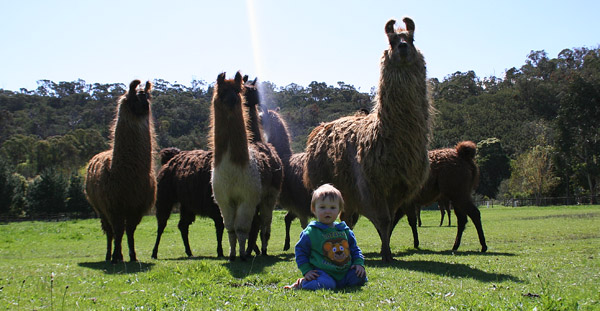 When you live in or near the city, it’s not easy to find opportunities for children to have hands-on experiences with many animals beyond the family dog, cat or guinea pig. Unless you have the rare space to keep them yourselves, larger animals are not only hard to find, but even harder to assess in terms of safety.

That’s why we have llamas. Llamas are the world’s greatest babysitters: possibly, the best large animal any urban toddler can meet – with no need for mum and dad to press their mental “panic button”!

In their wild state in the South American Andes, llamas lived under constant threat from one of nature’s stealthiest ambush hunters, the Mountain Lion (aka Cougar). Only keen sensory perception and infallible levelheadedness allowed llamas to protect their young from such a predator. As domestic animals, llamas have retained this acute awareness of their surroundings and are remarkably attuned to the subtlest emotional changes in those around them. This sensitivity fuels their instinctive urge to both protect and comfort anything more vulnerable than themselves; making them superb therapy animals, and fearless guardians for smaller varieties of livestock. 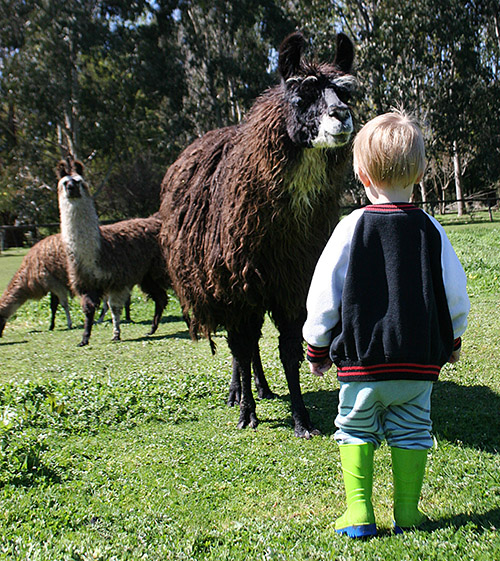 In their twenty years with us at Kingbilli, llamas have been observed cuddling orphaned kangaroos, fording flooded creeks to rescue stranded baby goats, and physically and forcibly halting the progress of visitors who were about to step on an unseen snake in the grass. Such actions come naturally to llamas… and that’s before you present them with children!

With adults, supposing no immediate risks abound; llamas are rather like cats. Upon arrival, they will inspect you, accept a pat or two, decide whether they find you especially interesting and if not, return serenely to whatever they were doing before you appeared. But with children – everything changes! The busiest llama will usually drop everything upon sight of a child, stride over to sniff them vigorously from head to toe to confirm their general state of health and then proceed to track their every move to ensure their well-being is maintained. Nothing a llama perceives as harmful will be allowed near the child … even unruly parents have been observed to be very gently but firmly herded away from their children when the llamas deemed them to be playing too roughly!!

Likewise, whilst llamas expect adults to treat them politely, and frankly, with a certain amount of deference (again, think of cats)… children are allowed all manner of concessions. Nothing is too much trouble! Now admittedly, llamas do not bite or kick – and their reputation for spitting is almost wholly undeserved – instead, when offended, they draw themselves up to their full height (often 180cm+), gaze disapprovingly down their roman noses, turn their woolly backs and proceed to ignore you for the remainder of the day. Thus, offending them is not the end of the world – but! – if you’re under the age of 10, you can do almost no wrong. Even an accidental slap in the face from an overenthusiastic toddler will be tolerated repeatedly with barely a flicker, whilst an adult committing such a crime would be shunned for about a week.

So whilst our ponies and larger horses all love visitors – the first activity we recommend for families coming to Kingbilli – especially those without much animal experience – is to go hang out in the llama paddock. Take a picnic for the kids, a glass of wine for the grown-ups… and immerse yourselves in large-animal-language. And if the warm sun and soft grass should lull you into a lazy frame of mind – never fear, the llamas will keep track of the kids for you!