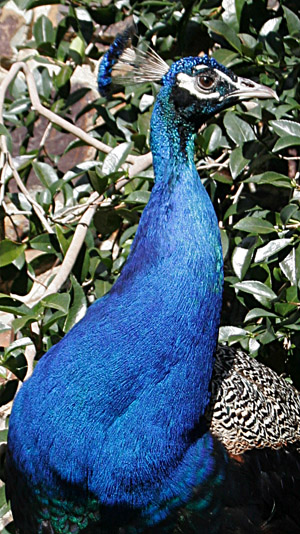 Long, long ago, on an island far, far away, Ginny and Michael met their first peacocks. They thought they were lovely (it was their honeymoon, so really, they thought everything was lovely).

Many years later, having heard this story many, many times, Ginny and Michael’s loving daughter, Georgina, bought her mother a pair of peafowl (one peacock, one peahen) for Mother’s Day. Ginny and Michael were delighted.

Sure enough, Mr and Mrs Peafowl had babies; then their babies had babies, who also had babies, until very soon, Kingbilli’s lush Homestead Gardens were ringing with the inimitable cries, calls and honks of nearly a dozen peacocks and peahens, all hand-fed and responded to by name.

Ginny and Michael thought this was lovely. Daughter Georgina moved out; and into the Cottage, some 400m away, where the cries, calls and honks could no longer be heard.

Luckily, Kingbilli’s guest accommodation, the Studio, is also some 400m away from the Homestead, thus our guests need not enjoy the sounds of peafowl unless they choose to venture purposefully into their domain.

Those brave individuals, however, will be rewarded with the glorious sight of these genuinely stunning, if not intellectually gifted, birds as they display their extraordinarily coloured plumage to all and sundry throughout their prolonged mating season, from September to January. 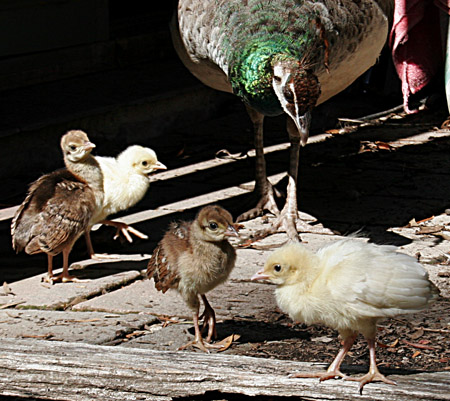 And if you’re lucky, you’ll also spot one of the many Mrs Peafowls meandering guardedly around with a new brood of cute chicks, each of whom make nothing other an endearingly quiet “peep peep” sound, until they attain almost full size, when they, too, will learn to cry, call and honk just like their parents, grandparents, aunts, uncles and cousins.