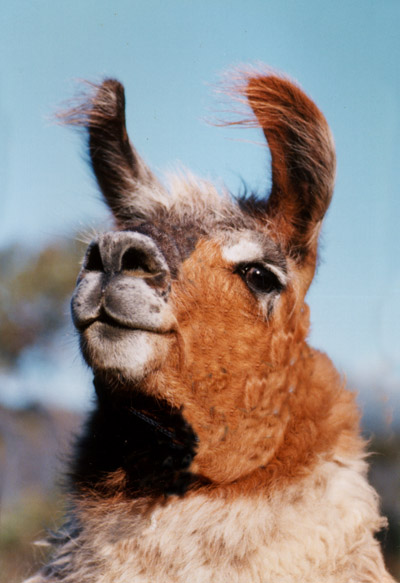 We glimpsed our first llamas in the late seventies. We’d taken the older children (Georgina, our youngest, not yet having made her appearance) to see Butch Cassidy and the Sundance Kid. Halfway through the movie, there they were … two strange animals tied to a railing, supposedly outside some Bolivan bank!!! We were intrigued. Throughout the film, we kept looking, hoping to see them again … but no such luck.

Next, Michael read an article about these curious creatures, explaining they are members of the Camelid family, related to the Dromedary and Bactrian Camels, as well as the Alpaca, Guanaco and wild Vicuña. A week later, we watched a documentary extolling their therapeutic effects upon people. We were sold.

We’d bought 200ha at Taggerty, a pretty little hamlet in beautiful north-eastern Victoria. The children were growing older, had almost finished school and we’d tired of city-living. Llamas topped the list of animals we’d like to farm, along with cashmere goats … and as two of our youngsters were keen riders … Australian Stock Horses. But we soon discovered llamas were scarce in Australia. Importing them was financially prohibitive so we put them on the back burner.… and settled on Cashmere instead (later to be exchanged with angoras … but that’s another story). 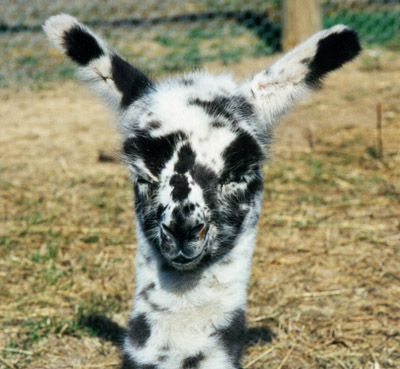 We embarked on a five-year building and development programme. Georgina was born and the years flew by. Cashmere was kind to us. Prices were good and we did well. Guest Cottages were added to the estate, complementing the farming enterprise and Kingbilli became a busy place. People arrived in ever-increasing numbers. Some came regularly … and wherever possible, planned their visits to coincide with kidding or foaling.

Why, we wondered? The answer? An afternoon spent sitting beneath a shady tree watching the babies play was hard to beat. It was relaxing and peaceful. What then, if we increased the interaction between these stress-laden city dwellers and our four-legged friends. But, it must be the right four-leggeds. Goats were cute … but visitors handling them was sometimes impractical … and horses for the inexperienced could be downright dangerous. We needed an intelligent animal with a gentle disposition. One who was unfazed by, yet friendly towards people. You guessed it…llamas!!

Llamamania set in. We poured over magazines. We phoned people. We discovered Mick and Anita Wescombe of Llovely Banks Llamas near Geelong. They sent us a gorgeous video and suggested we visit as many breeders as possible to ascertain which particular type of animal we wanted before buying. We did just that, finding llama owners to be a friendly bunch. Nothing was too much trouble. No-one minded sparing time to talk. Breeders spoilt us with lunch, answered endless questions and introduced us to their animals. 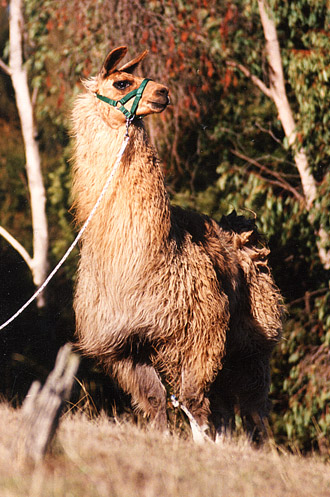 We decided we preferred a large-framed, strong boned llama with heavy fleeced and those wondrous banana ears!! If we could find them, we thought we’d aim for nine breeding females and eventually two or three herdsires.

The big moment had come! On the first day of Autumn, we headed down to Llovely Banks! We weren’t going to rush in, you understand. Just look, learn then go home and think about it…

So much for thinking!

We headed home and exactly twenty minutes (and one phone call) after walking in the door, became the proud owners of three llamas. Two girls and a boy … with an unquenchable desire for more.The following Easter Friday (1995), the younger two, Jackie, (known henceforth as The First Lady due to her deeply held belief in her own superiority over all other creatures, both two and four-legged) and Big Luke (who stole Georgina’s heart with a kiss at Llovely Banks on that very first day) were delivered.

Our third female, Momma Mels, was pregnant and so left for collection until after the birth of her cria. In July, Gentle Jess and the irrepressible Jacko joined our herd. Finally in September, Mels arrived – with baby Gypsy Rose in tow. The following Summer we added Brianna and Bubbles to the group. Then came our first llama babies…………and the rest is history!

Today, we maintain a strict breeding program, focusing on tall, elegant animals with healthy conformation and gentle temperaments. More babies arrive each Spring, each one a new and entertaining character.

Ask any llama owner to describe his or her llama and you’ll be over-whelmed by adjectives: charismatic, aloof, regal, intelligent, intuitive, affectionate, curious, compassionate, cheeky, fun, … the list goes on. And on! 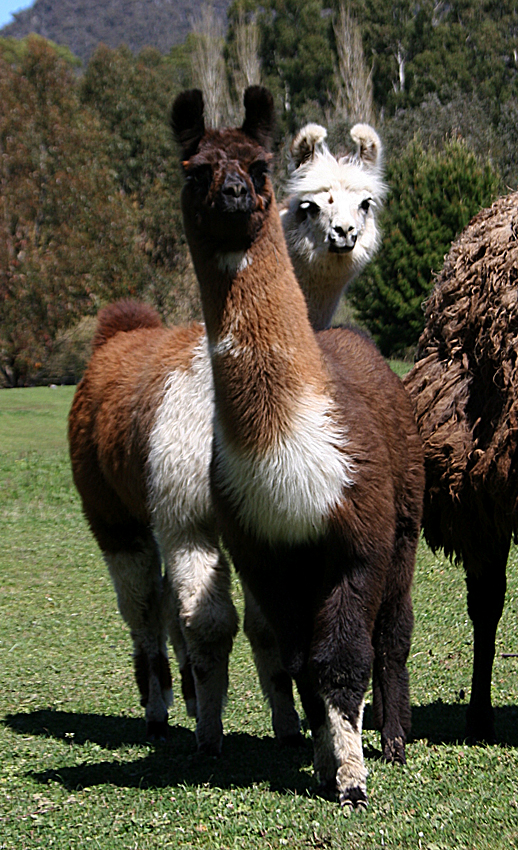 But perhaps the most apt is versatile. Over the years, we have discovered this is truly a multi-faceted creature. One who can and will provide you with companionship, affection, loyalty and enjoyment … in addition to expanding your range of interests.

Llamas have extremely individual personalities, and incredibly gentle, laid back temperaments. They make ideal, and very safe, companion animals. Intelligent, responsive and patient, they’re easily trained … and once training is complete … a 200kg adult llama can be handled safely by a small child … or even taken indoors without fear of damage.

They also make excellent hiking companions, known as “llama trekking”. Agile and sure-footed over almost any terrain … if in good condition … llamas can carry loads of around 25% of their total body-weight for 20-25km a day. Furthermore, their twin-toed, soft, leathery padded feet cause minimal environmental impact along the trail, and their tendency to browse rather than graze, lessens damage to native vegetation.

They are also much valued for their therapeutic qualities … their tranquil gaze and intrinsic curiosity seeming to indicate a genuine interest in, and understanding of the special needs of the elderly, frail and handicapped. 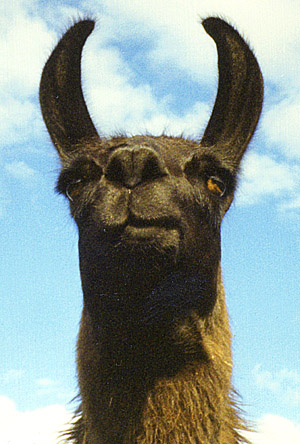 Here, one of their greatest – and perhaps most surprising – values has been as guard animals; initially for Georgina’s angora goats, then for her injured and orphaned wildlife… and now it seems, their protective attitude has spread towards all herbivorous creatures in general!

Due to their history of tackling with large predators in South America, they have an in-built dislike for all things canine and feline: thus, any fox, stray dog or feral cat found wandering Kingbilli is swiftly and severely escorted off the premises. Any which failed to leave promptly enough were coated in green bile (the infamous “llama spit”) and repeatedly pounded into the ground with a bony breastplate, evolved for the purpose.