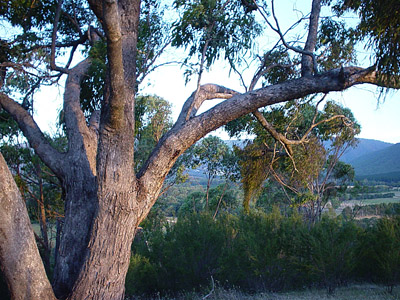 Prior to this part of Victoria being cleared for farming, dry sclerophyll forest of Apple, Grey and Yellow Box, Buxton Gums, Red Stringy-Barks, Messmate, Peppermints, Blackwoods and Silver Wattles typified the region, with magnificent stands of Manna Gums towering along the rivers and creeks.

So, at Kingbilli, in 2001, when the daughter of the family came of age, and took hold of her newfound authority as only 18 year olds can, she announced the need to recreate large natural havens of such locally indigenous bush to ensure an equal part of the property was devoted to accommodating our wildlife, as was for us humans and our domesticated critters. 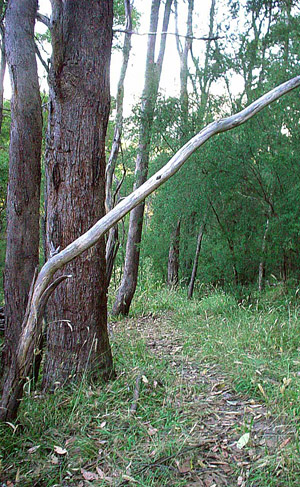 First, attention turned to steeply rising patch of land in the north-eastern corner of the property, which held particular promise. Nearly 50 acres of hill and dale, decades of grazing had reduces it to fairly sad-looking scrub, with a muddy little waterhole at the bottom.

A large mob of 40 Eastern Grey Kangaroos inhabited the surrounding district, and on occasions, small family groups of 4-5 individuals had been observed grazing there. Brief glimpses of Swamp Wallabies were had during the wetter months, and certainly some Wombats were present. Rumour also suggested Gliders existed nearby … however, all animals observed remained tentative and wary. Encouragement was dearly needed. 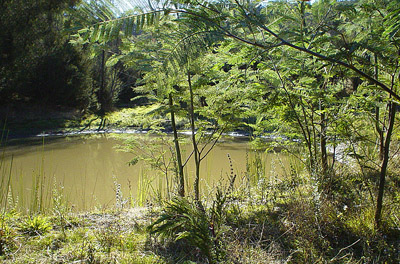 Thus, named after the soft leafy hues of Eucalypts and Silver Wattles, the establishment of “Blue Gully” as Kingbilli’s first wildlife-exclusive zone marked the beginning of a new evolutionary stage in Kingbilli’s history.

Carefully fenced to exclude livestock whilst allowing safe access by native animals, it has been fully revegetated to its original indigenous state. 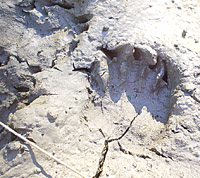 The erosion causing the muddying of the waterhole was resolved, and the spot carefully re-landscaped to ensure clear, year-round water to encourage any passing wildlife to take-up permanent residence … and, incidentally, provide the perfect one-stop checkpoint to monitor all species present by examining the footprints they have so helpfully left at the water’s edge. 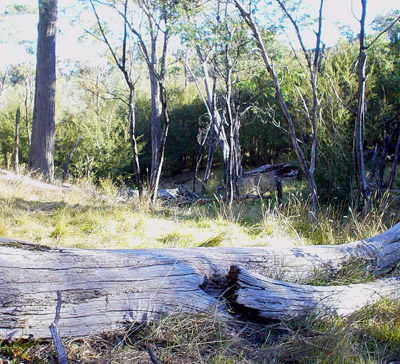 Completion of the project has taken time, but today, Blue Gully’s deceptively peaceful veneer conceals a busy ecosystem teaming with life. The birdlife is exceptional, and binoculars have become an obligatory dress accessory for all visitors.

Yellow-Tailed Black Cockatoos, Kookaburras, Tawny Frogmouths and Boobook Owls, King Parrots, Eastern Whipbirds, a wealth of Galahs, Wrens, Thrushes, Currawongs, Bower Birds and Rosellas delight all comers with their antics… whilst Azure Kingfishers are often found by the waterhole. At night a lone Sooty Owl has been heard on occasion, whilst a pair of magnificent Wedge-Tailed Eagles have made their home at the sanctuary’s peak, and have since raised 1-2 chicks each year.

The possum population has positively exploded, with Brushtails, Ringtails, Bobucks and Eastern Pigmy Possums … and Sugar and Feather-Tailed Gliders leaving a multitude of curious claw- and tooth-marks in the trunks for the interested wanderer to investigate. 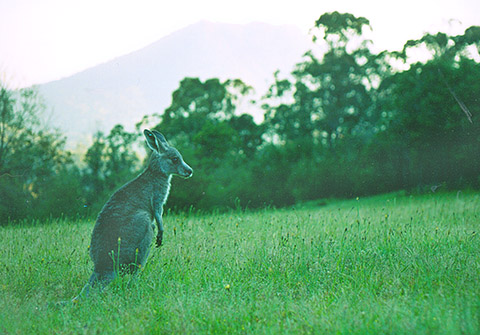 Accompanying these is a small but significant population of Brush-tailed Phascogales, a threatened species of possum-like Dasyurid. Whilst at ground level, the cautious, rarely seen Long-Nosed Bandicoots surreptitiously go about their business, leaving as the only evidence of their presence small, conical holes dug in the earth to uncover tasty underground fungi.

The newly resident Koalas proclaim their locations with spine-chilling growls and moans throughout the night, whilst by day they entertain themselves by throwing sticks and gumnuts at passers-by … whilst their closest relatives, the Wombats, now exist by the dozen across the whole property. 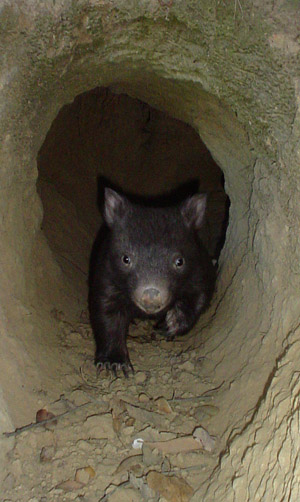 Several Swamp Wallabies have made Blue Gully their permanent home, and the tracks of their youngsters usually can be found around the waterhole in the Spring. Echidnas can be observed snuffling amongst the fallen logs seeking out creepy-crawlies for their dinner … and after dark, families of Agile Antechinus scatter with great speed, foraging for similar culinary delights.

Eastern Grey Kangaroos have become a common sight: the structure of their social system is such that females with pouch-young aged around 6-7 months leave the main mob and head for a quiet, secluded location where the joey may take its first tentative steps without disruption from older siblings or dominant males. A number of these local lasses have deemed Blue Gully perfect for this activity. 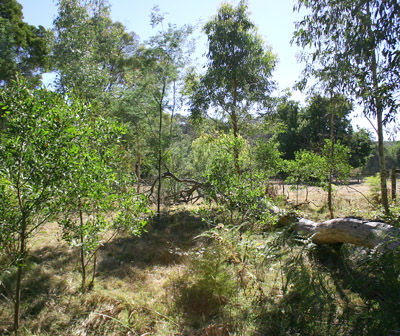 Small colonies of the tiny insectivorous Lesser Long-Eared Bat and Little Forest Bat have found the habitat to their liking. These exquisite little creatures are a source of great interest to visiting children – and are easily seen at dusk when they head downslope into the open spaces around the paddocks to catch insects on the wing.

Inspired by the success of Blue Gully, Georgina has continued to create new and wondrous reserves around the property. In 2008, the Little River became the next site on the agenda. Kingbilli’s frontage to the stream is some 500 metres in length, and the bank was sorely denuded of vegetation following the enthusiastic efforts of more than twenty years of goats! 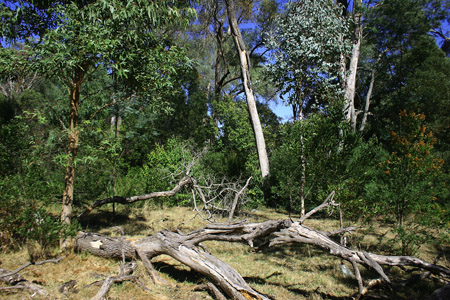 Hence, wildlife-friendly fencing began, running the full, curving length of that side of the property, some 20-30 metres inland from the bank. The river flats had been prime grazing land for our livestock, hence the decision to turn this stretch into a wildlife-exclusive zone constituted rather a sacrifice, but one well worth making. Just on 600 seedlings were planted, and to date, their growth has been rapid.

This new development creates a substantial wildlife corridor linking Kingbilli to the riparian forest of the neighbouring Cathedral Range State Park. Once the new vegetation matures, we should see an influx of Long-Nosed Bandicoots, Koalas and perhaps even Yellow-Bellied Gliders coming along the river and into the gardens around the cottages.

Meanwhile, in 2009, a third wildlife-exclusive zone was created in the extension to Kingbilli’s gorgeous wetlands. On the edge of the Homestead gardens, two expansive lakes lines with reeds and furnished with vegetated nest islands have long been a major attraction for waterbirds of every shape and size.

Extending this area to include a further two acres of swampland, Georgina supervised the construction of a third, smaller lake with an even larger island, and surrounded it with over 300 locally indigenous seedlings. A canal linking this lake to the other two makes the whole area a wading bird’s paradise. 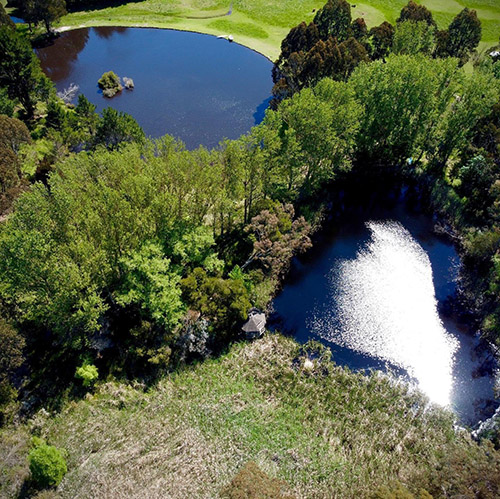 A string of gums tentatively links this area across the southern boundary of the property to the new Little River reserve, and the quality of this corridor will be improved over the next couple of years. Already, however, an extraordinary tick of approval has been given to the new wetlands reserve by a pair of Swamp Harriers, who have been nesting there since 2010!

Next on the list of major wildlife projects is to create a second riparian corridor along Sterling Creek, which runs through the centre of Kingbilli. The lie of land and sharp twists and turns of the creek will make this development rather tricky – but plans are in the making, so watch this space!

If so inclined, Kingbilli’s guests are encouraged to wander through all of Kingbilli’s wildlife haunts at their leisure … and sit awhile in the shade of new young trees, with watchful eyes, to see what they can see. Here, animal lovers from all walks of life seem to feel at home.